EXPLORE THE STORY OF OREGON'S FORESTS

Oregon Forest Facts tells the story of Oregon’s forests through data, charts and graphs. It fills a need for accurate and current information about Oregon’s forests in an easy-to-access format. 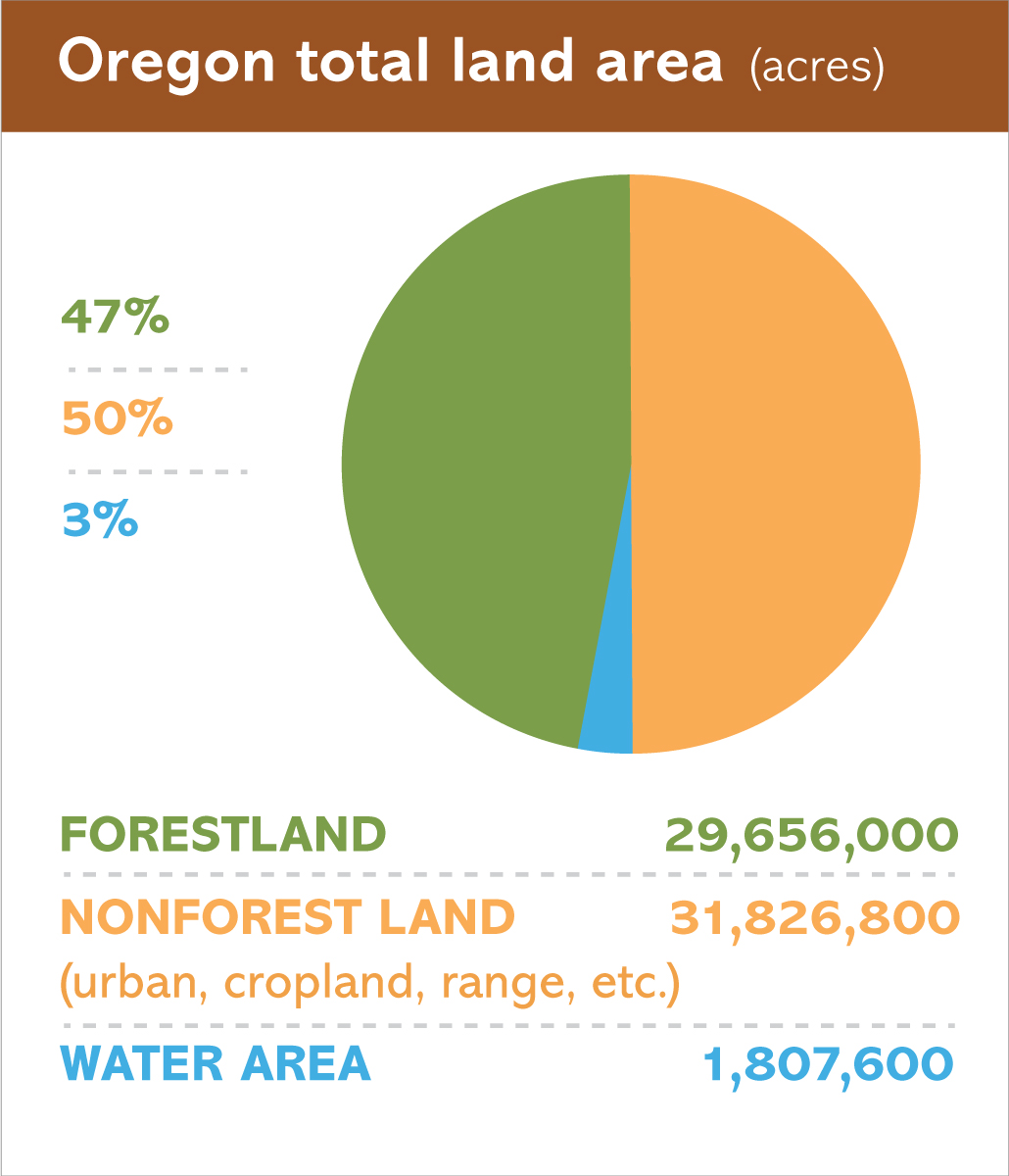 Oregon’s forests are managed to reflect the varied objectives and practices of a diverse array of landowners. These include the federal government, which owns the largest portion of Oregon’s forestland, as well as state, county and municipal governments, private timber companies, tribes and small woodland owners, each with a range of goals for their land. Some forests are managed primarily for timber production, while others are set aside as parks, wilderness areas or reserves to protect old-growth, riparian or endangered species habitat. Many Oregon forest landowners try to find a balance between environmental and economic values, managing their forests for multiple uses, including recreation, water, wildlife habitat and timber. 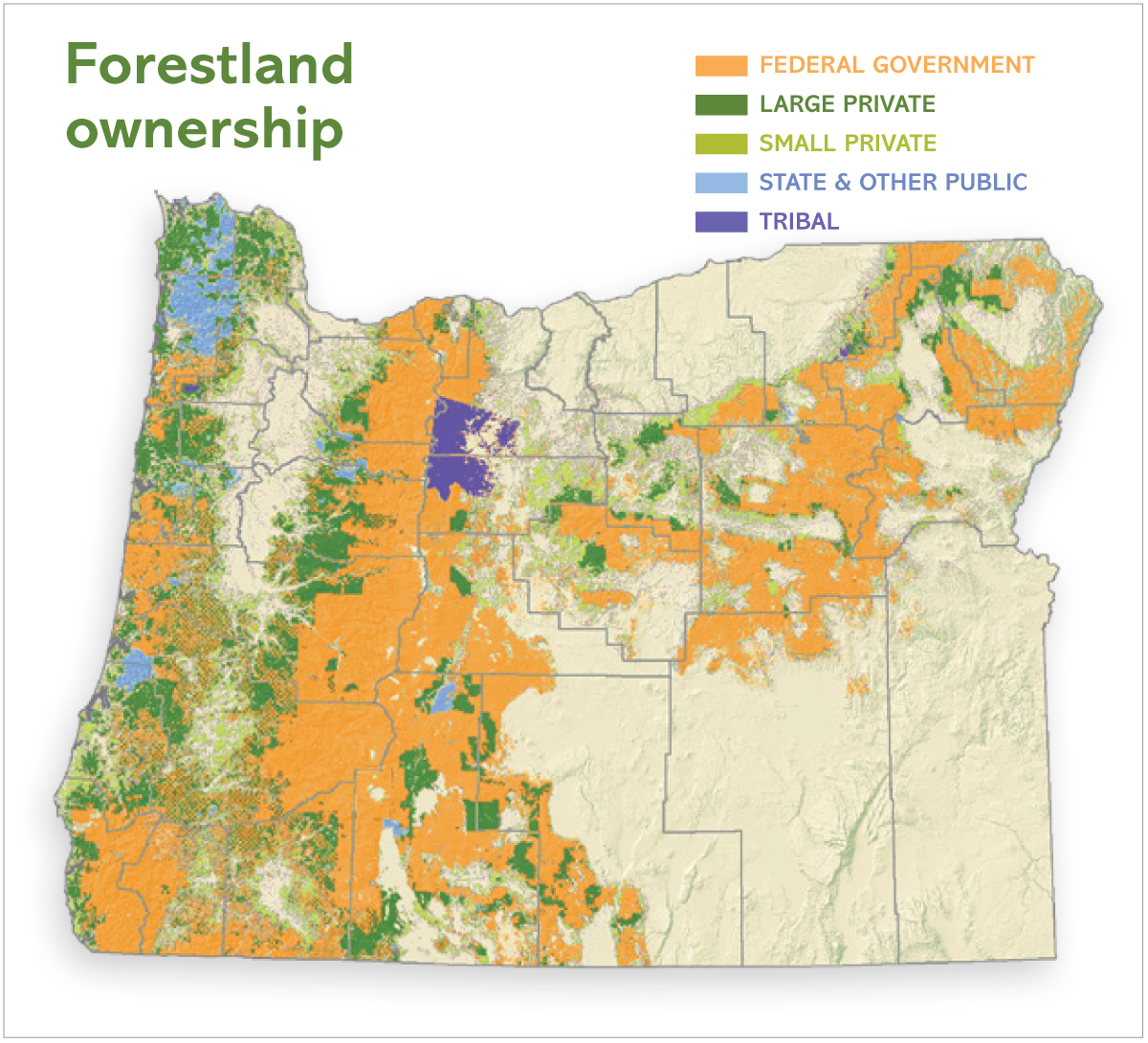 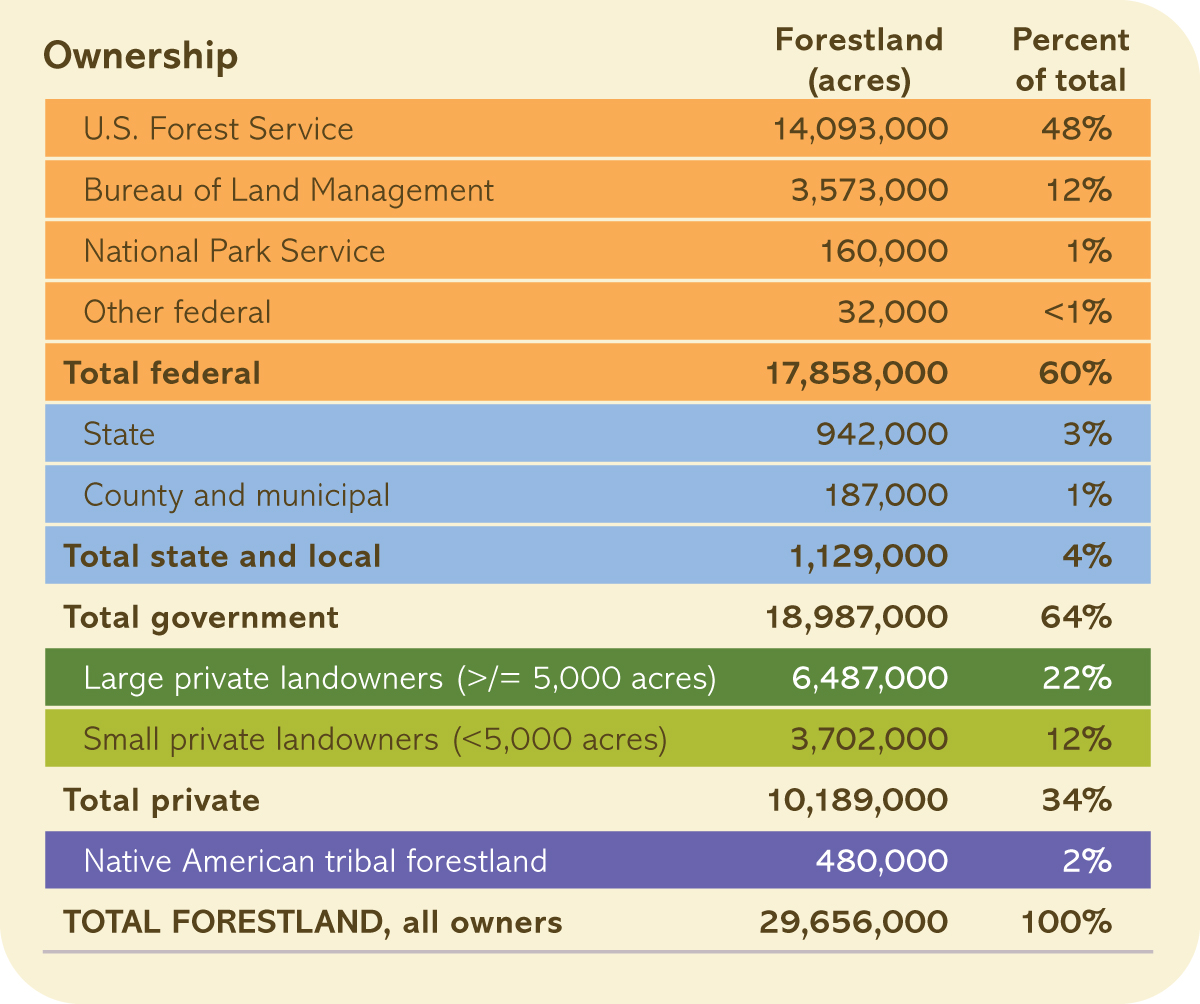 While the federal government manages most of the forestland in Oregon, only a fraction of Oregon’s timber harvest happens on federal land, and most of that is from thinning. About 76 percent of the total state harvest comes from private timberlands. 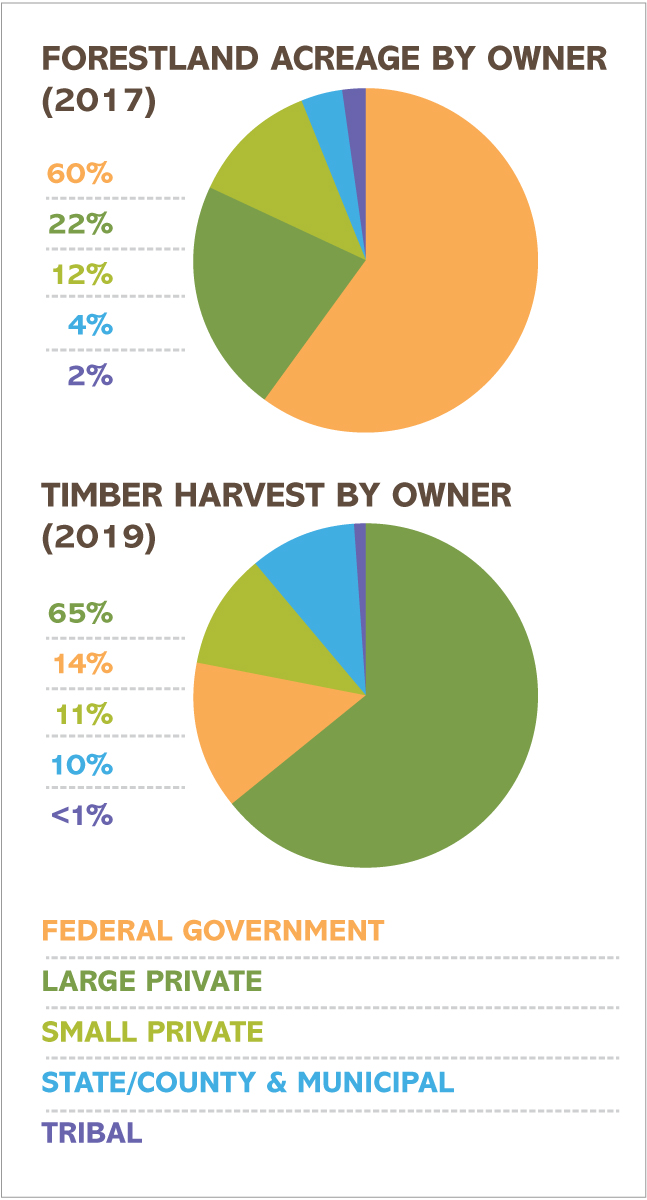 Sustainable forestry requires following best management practices to protect water and other resources. In Oregon, the Oregon Forest Practices Act mandates the use of best management practices. An independent third-party audit commissioned by the Oregon Department of Forestry found that Oregon-grown wood meets the Leadership in Energy and Environmental Design (LEED) credit for wood used in a project if it comes from forestland that is subject to the Oregon Forest Practices Act.

Recent updates include increasing the size of no-spray buffers for herbicide use around homes, schools and water intakes, and requiring wider shade buffers of trees along streams inhabited by salmon, steelhead and bull trout. A state law passed in 2020 mandated the development of an electronic notification system for helicopter herbicide application to improve communication among landowners, helicopter operators, neighbors and water users. 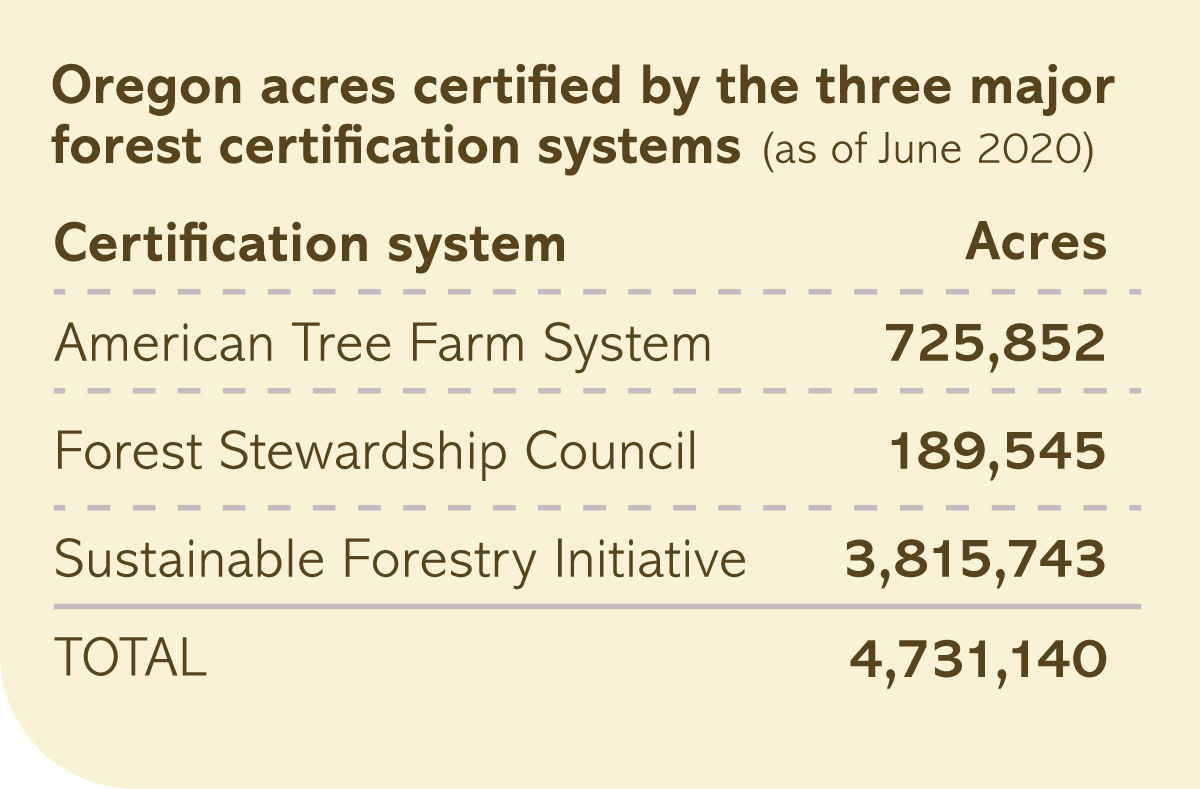 Timber harvest levels from public and private forestlands over the past 20 years have remained relatively stable, although the Great Recession (2007-09) and the related collapse of the housing market brought a severe contraction in the U.S. demand for lumber. Consequently, Oregon’s timber harvest reached a modern-era low in 2009, the smallest harvest since the Great Depression in 1934. By 2013, the harvest had rebounded to roughly pre-recession levels.

In the five most recent years where data is available (2015-2019), Oregon timber harvest averaged around 3.8 billion board feet. But the coronavirus pandemic and subsequent economic slump in 2020, as well as the heavy impact the year's Labor Day fires had on Oregon forests, are likely to affect the state's future timber harvest, especially with an uptick in post-fire salvage logging on private land. 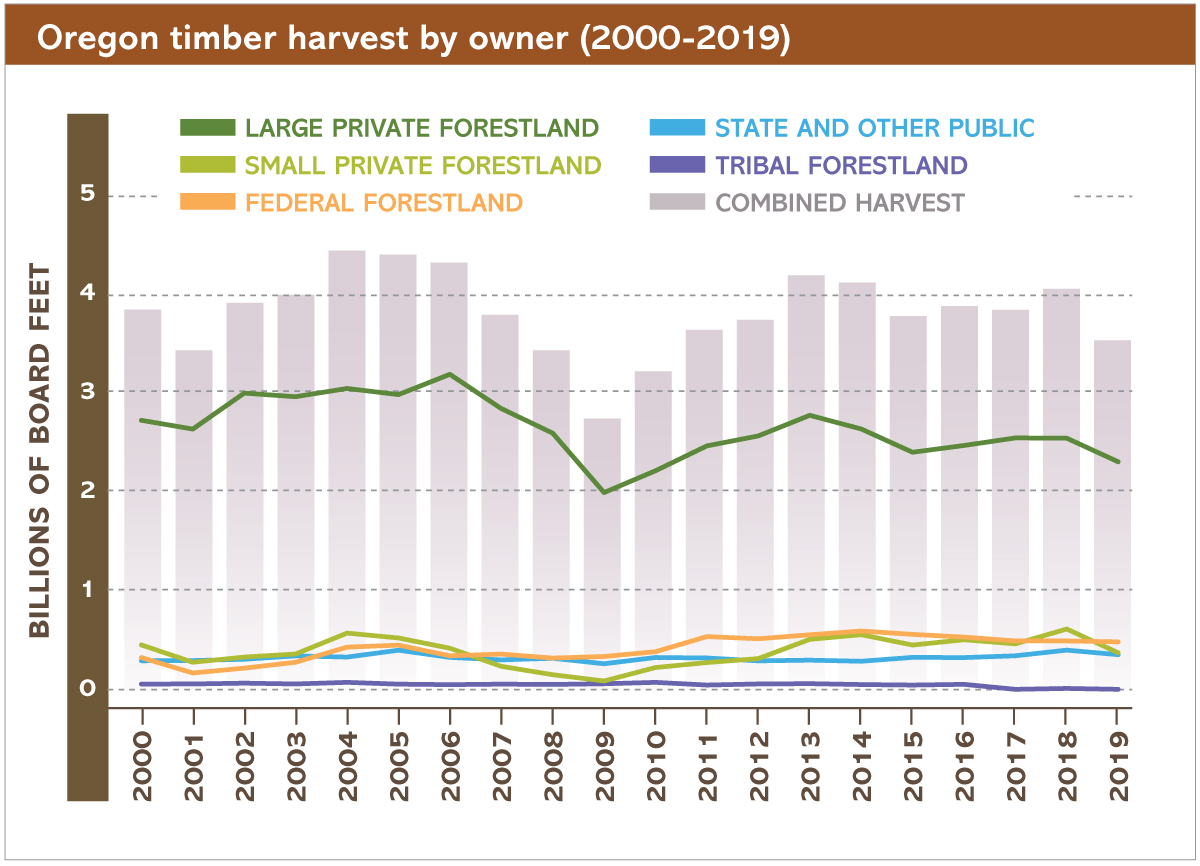 On Oregon's private forestland, where most timber harvest happens in the state, the amount of wood harvested each year is about 77 percent of the annual timber growth. About 11 percent of that growth is offset by trees that die from causes such as fire, insects and disease.

On federal lands, only about 8 percent of the annual timber growth is harvested each year. The amount of timber that dies offsets annual growth by 36 percent. The remainder of the growth, a net change of 56 percent, adds to the volume of standing timber in those forests.

High net change in growth isn't always beneficial, however. For example, in federal ponderosa pine and mixed conifer forests in eastern and south-central Oregon, it has created unusually dense forests with stressed trees that are more prone to insect infestation, disease and uncharacteristically severe fire.

Oregon is number one

Oregon has led the nation in the production of softwood lumber and plywood for many years. Oregon is also a leader in producing value-added engineered wood products such as cross-laminated timber (CLT), glue-laminated timber (glulam) and mass plywood panels (MPP). 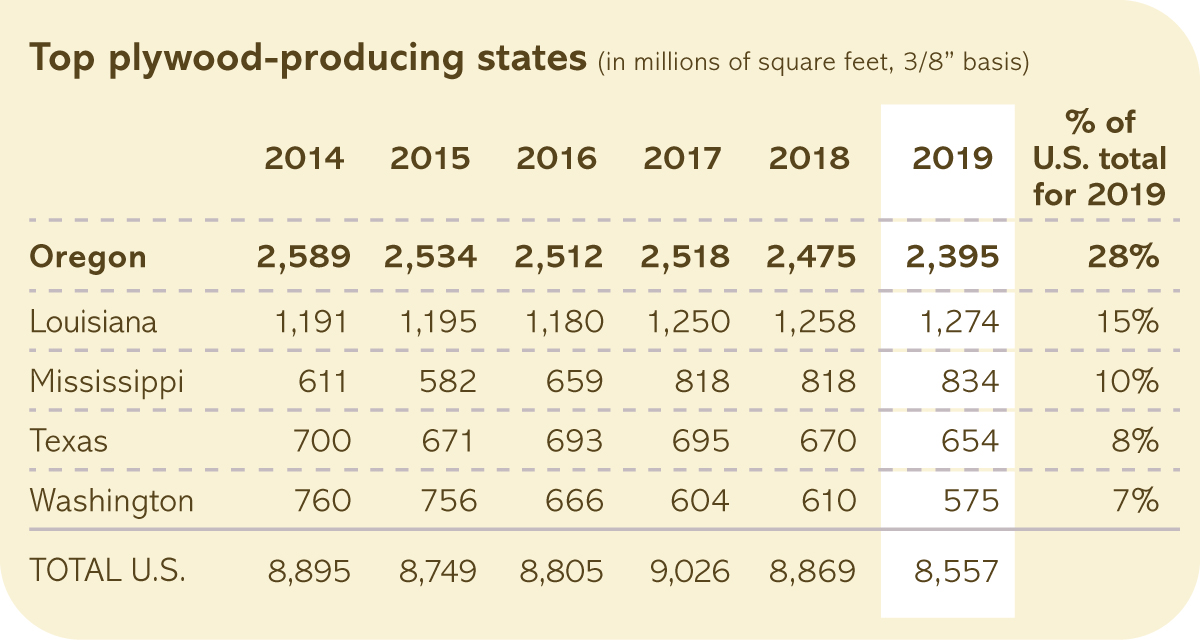 In Oregon, more than 300 public water providers rely on surface water from rivers, lakes or reservoirs as their main source, to supply about 75 percent of Oregonians with safe drinking water. Since nearly half of Oregon is forested, much of this surface water comes from forested watersheds. Some are publicly owned and managed as a water resource. Others are privately owned and managed primarily for timber production.

The Oregon State University Institute for Natural Resources, with the support of funding from the Oregon Forest Resources Institute, published a report in 2020 called Trees to Tap that examines the effects of forest management on drinking water in Oregon. Written by faculty from the OSU College of Forestry, the report found that forested watersheds, whether managed or unmanaged, produce higher-quality source water than any other type of surface water source. Although forest operations can impact drinking water sources, the report found that best management practices, laws, regulations, monitoring and scientific research are all means to protect against these risks and safeguard the quality of source water.

Here are some of the key findings and recommendations in Trees to Tap: 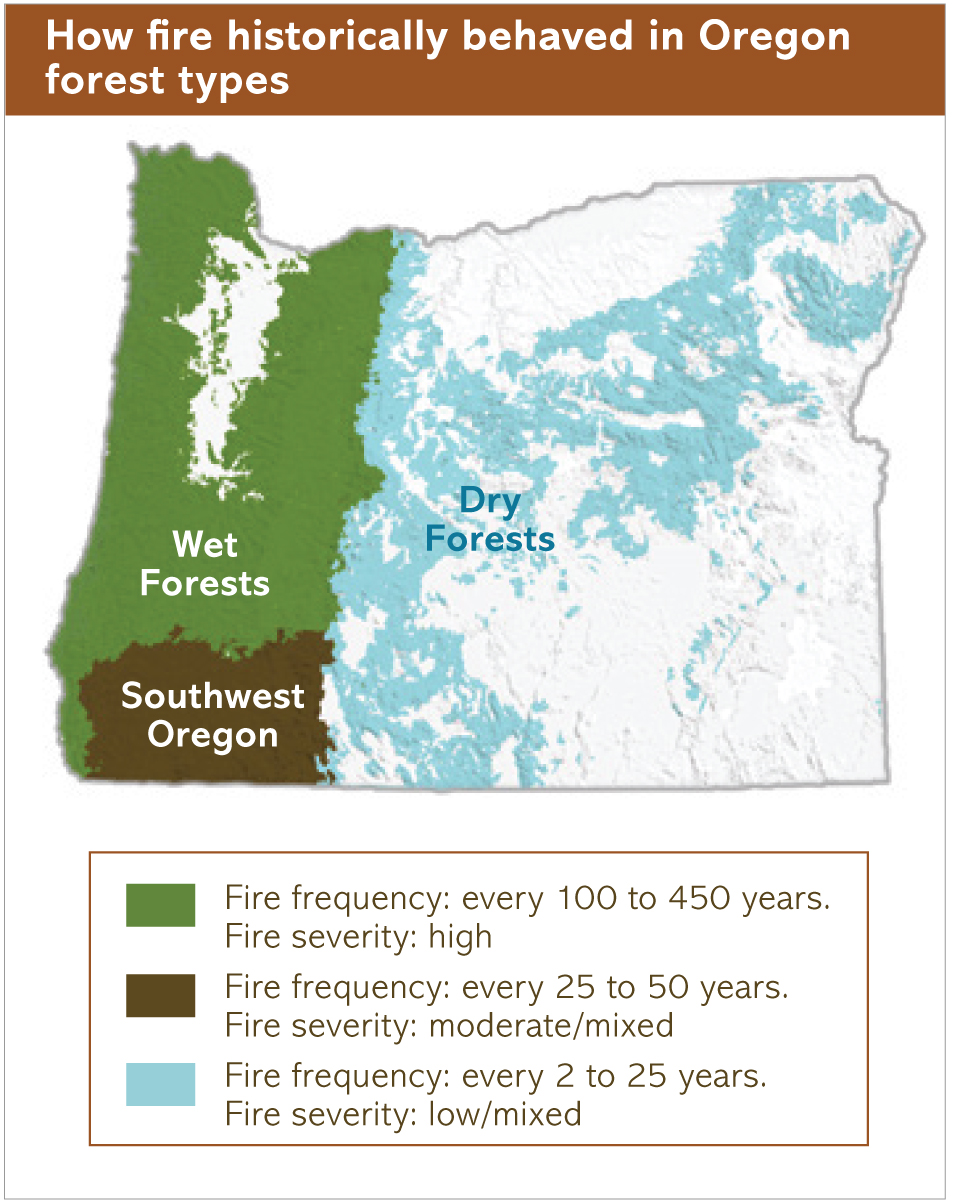 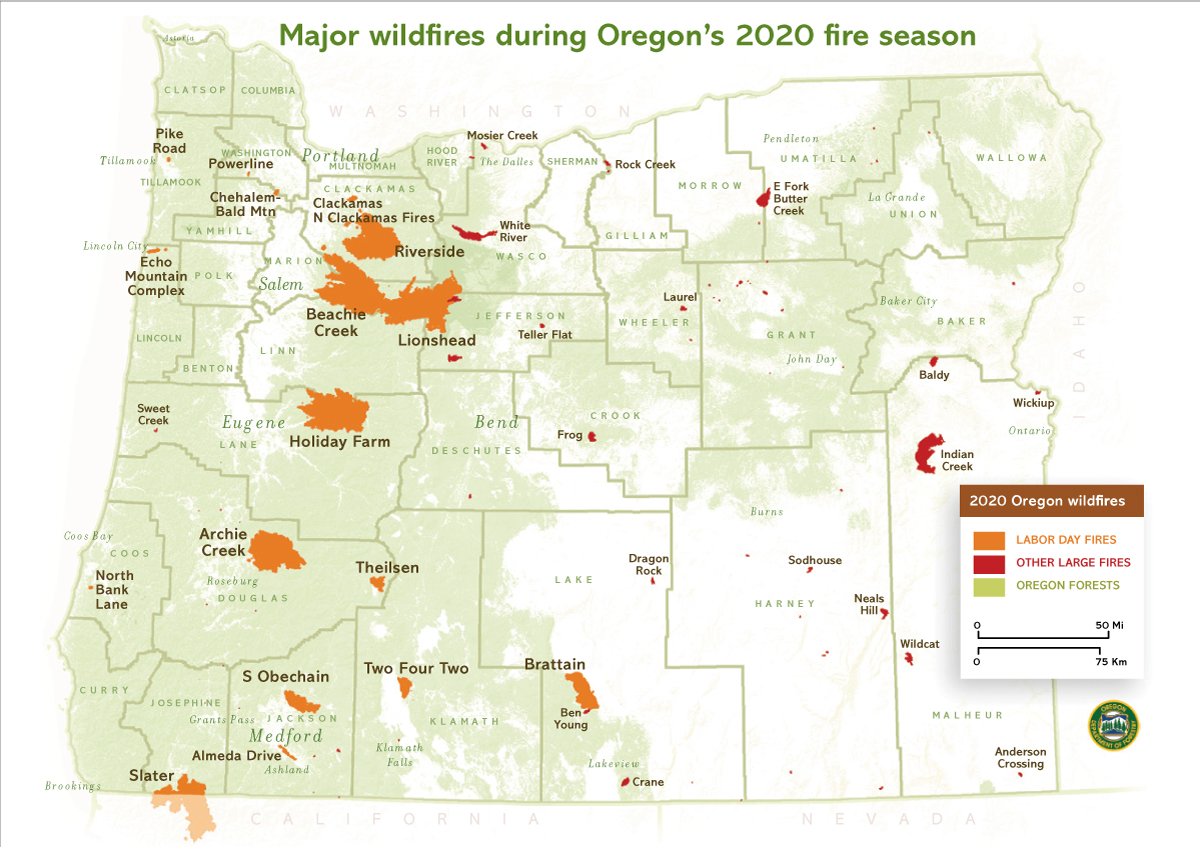 Over Labor Day weekend 2020, unusually high winds and extended dry weather caused the rapid expansion of multiple wildfires in Oregon. Over a million acres were burned, with the worst fires concentrated in the heavily populated western part of the state. About 40,000 people were evacuated because of fire danger. An additional 500,000 people were asked to prepare to evacuate at a moment’s notice. The cities of Blue River, Detroit, Gates, Phoenix, Talent and Vida were substantially damaged in the Labor Day fires. Statewide, nine people died and more than 4,000 homes were destroyed. Hazardous smoke from the fires blanketed the state, posing a public health risk in the midst of a pandemic.

Following Labor Day weekend 2020, Oregon simultaneously had five “megafires” – fires greater than 100,000 acres in size – and eight other large fires of about 1,000 acres or more. Four other smaller fires that burned less than 1,000 acres also broke out. All 17 of these fires either started or blew up on Sept. 7 and 8, 2020. 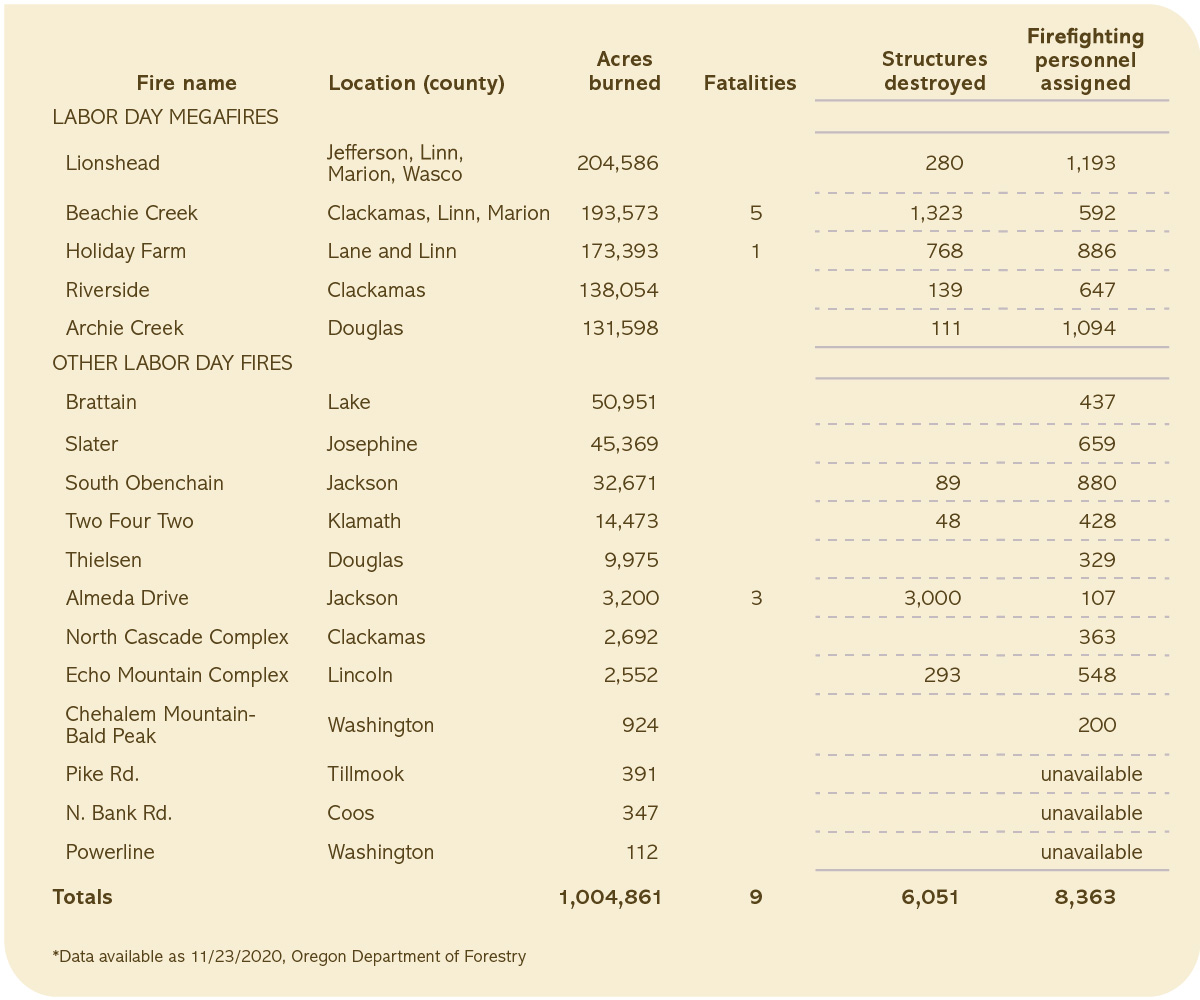 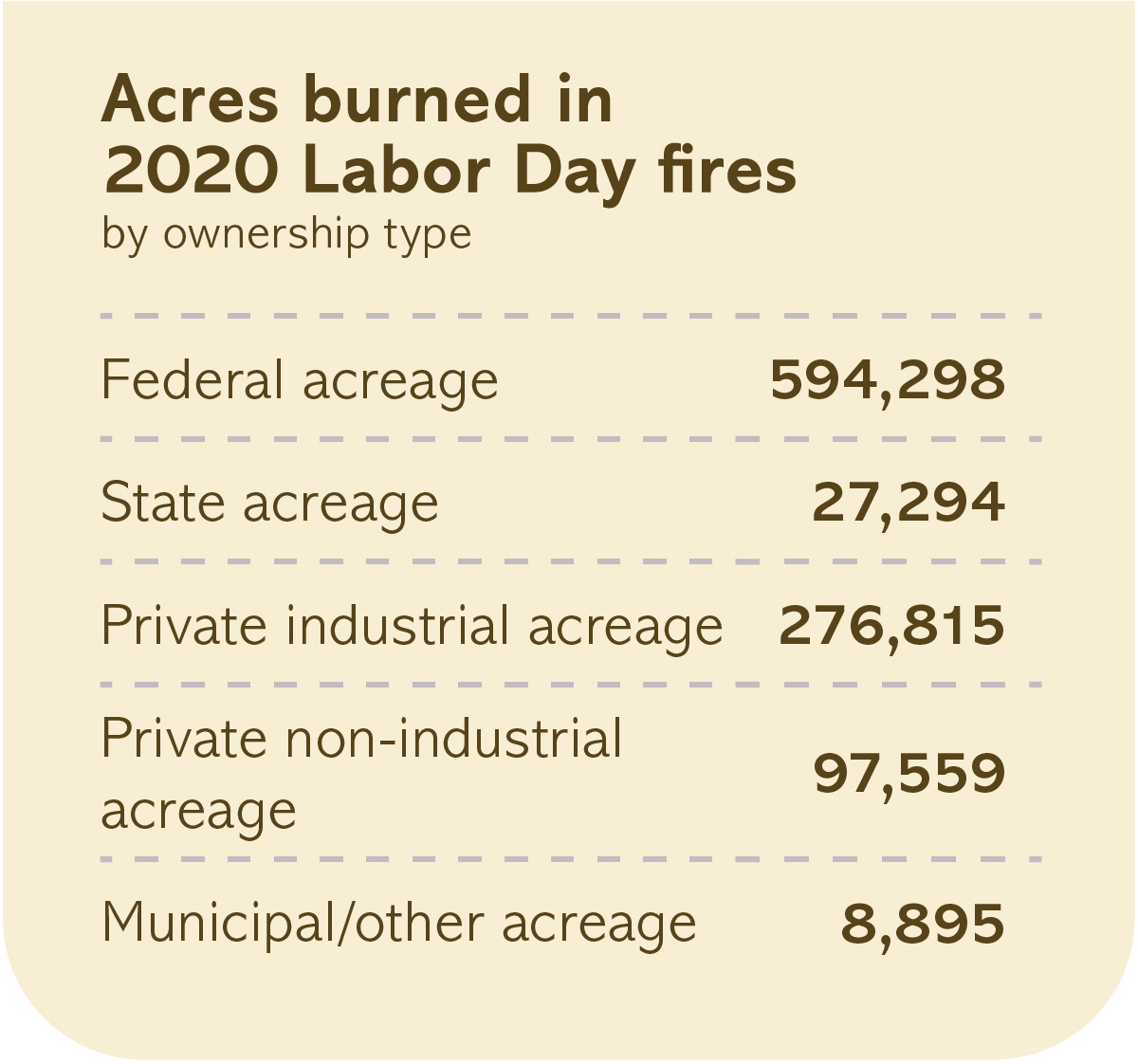 Oregon had two very different fire seasons in 2019 and 2020. The 2019 season was relatively quiet, while 2020 was one of the worst the state has ever experienced. The increasing number of catastrophic fire seasons such as Oregon experienced in 2020, 2018 and 2017 are due to a number of factors, including climate change. A warming climate has led to longer, hotter and drier fire seasons, and contributed to more drought and insect outbreaks that weaken or kill trees and make forests more susceptible to wildfire damage. 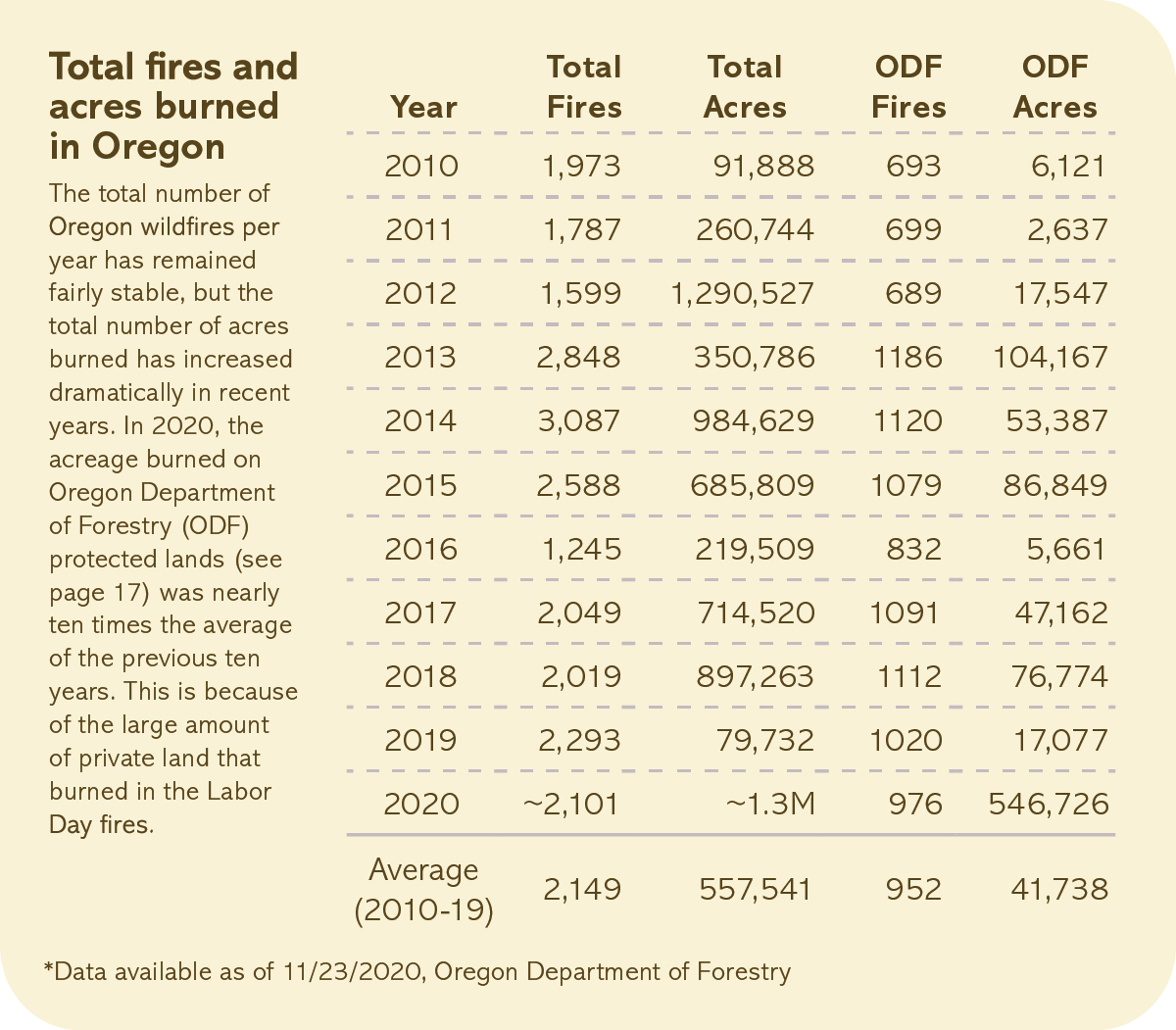 The Oregon Department of Forestry (ODF) serves as the fire department for 16 million acres of private and public forestland, including state forests and, by contract, federal Bureau of Land Management forests in western Oregon. The U.S. Forest Service maintains its own system to suppress fires on national forests, but collaborates with ODF on firefighting efforts.

ODF strives to put out fires quickly and at the smallest possible size, to protect human lives and property as well as timber-producing forests that support Oregon’s economy. This is accomplished through a complete and coordinated system that brings together personnel and resources from other public agencies, private forest landowners and contractors to help ODF fight fires.

In early 2019, Gov. Kate Brown created the Governor’s Council on Wildfire Response to review Oregon’s current model for wildfire prevention, preparedness and response, analyzing whether the current model is sustainable given the state’s increasing wildfire risks. Later that year, the council identified the need for comprehensive change and released a set of recommendations aimed at helping Oregon achieve the goals of creating fire-adapted communities, restoring and maintaining resilient landscapes, and responding safely and effectively to wildfire.

The state and federal government, in partnership with local stakeholders, are working to accelerate restoration work aimed at improving the health and fire resiliency of Oregon’s federal forests. Since 2016, an agreement known as Good Neighbor Authority has allowed ODF to assist with accomplishing forest restoration projects on federal lands. In 2019, Gov.Kate Brown signed a shared stewardship agreement with the U.S. Forest Service to increase this type of forest restoration work.

By absorbing carbon dioxide, a greenhouse gas that’s a major contributor to global warming, forests are a key ally in the fight against climate change. Through photosynthesis, trees turn carbon dioxide into solid carbon that’s stored in the wood, and they release oxygen as a byproduct. As a result, Oregon’s forests store significant amounts of carbon, sequestering it from the atmosphere. Some of that carbon remains sequestered even after trees are harvested and made into wood products.

In fact, the total carbon sequestered in Oregon by the state’s forests and wood products made here is estimated to be 49.5 million metric tons of carbon dioxide equivalent each year, according to the Oregon Forest Resources Institute report Carbon in Oregon’s Managed Forests. Oregon’s forests also annually sequester about 30.9 million metric tons of carbon dioxide equivalent. This forest carbon sequestration rate is the highest of the western states, and one of the highest in the country. 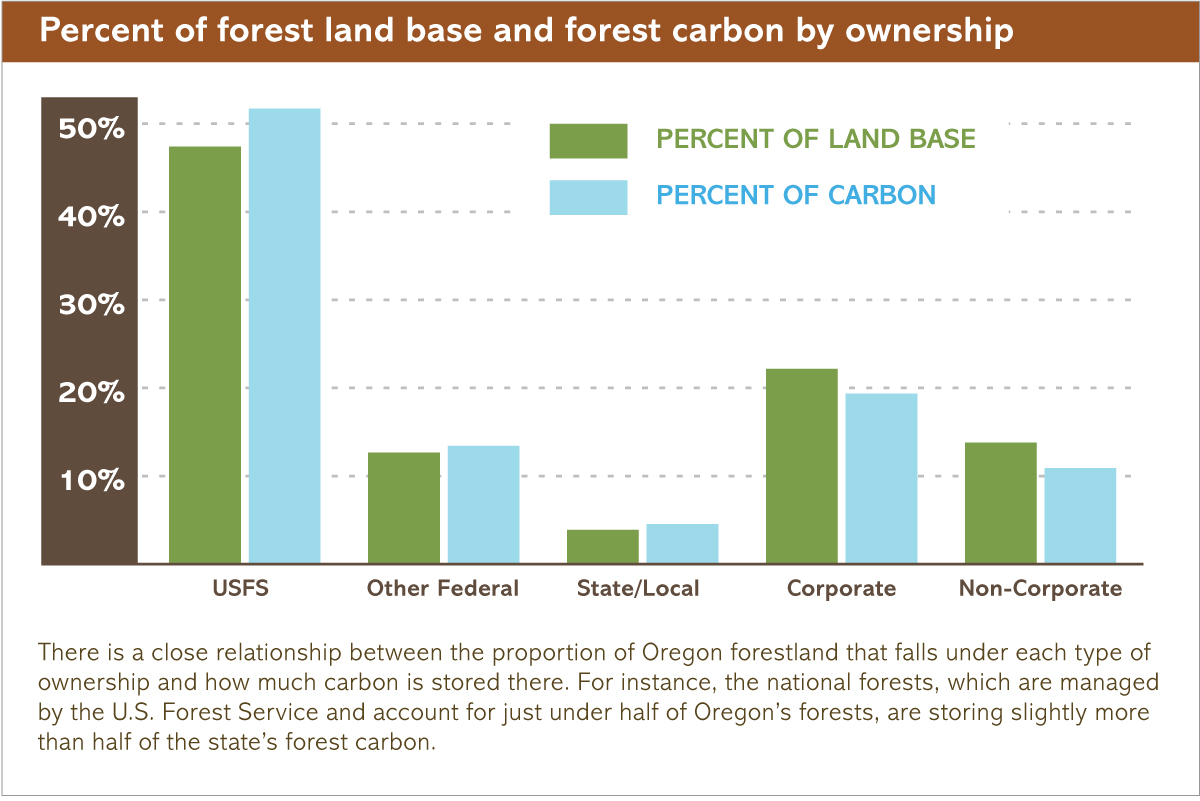 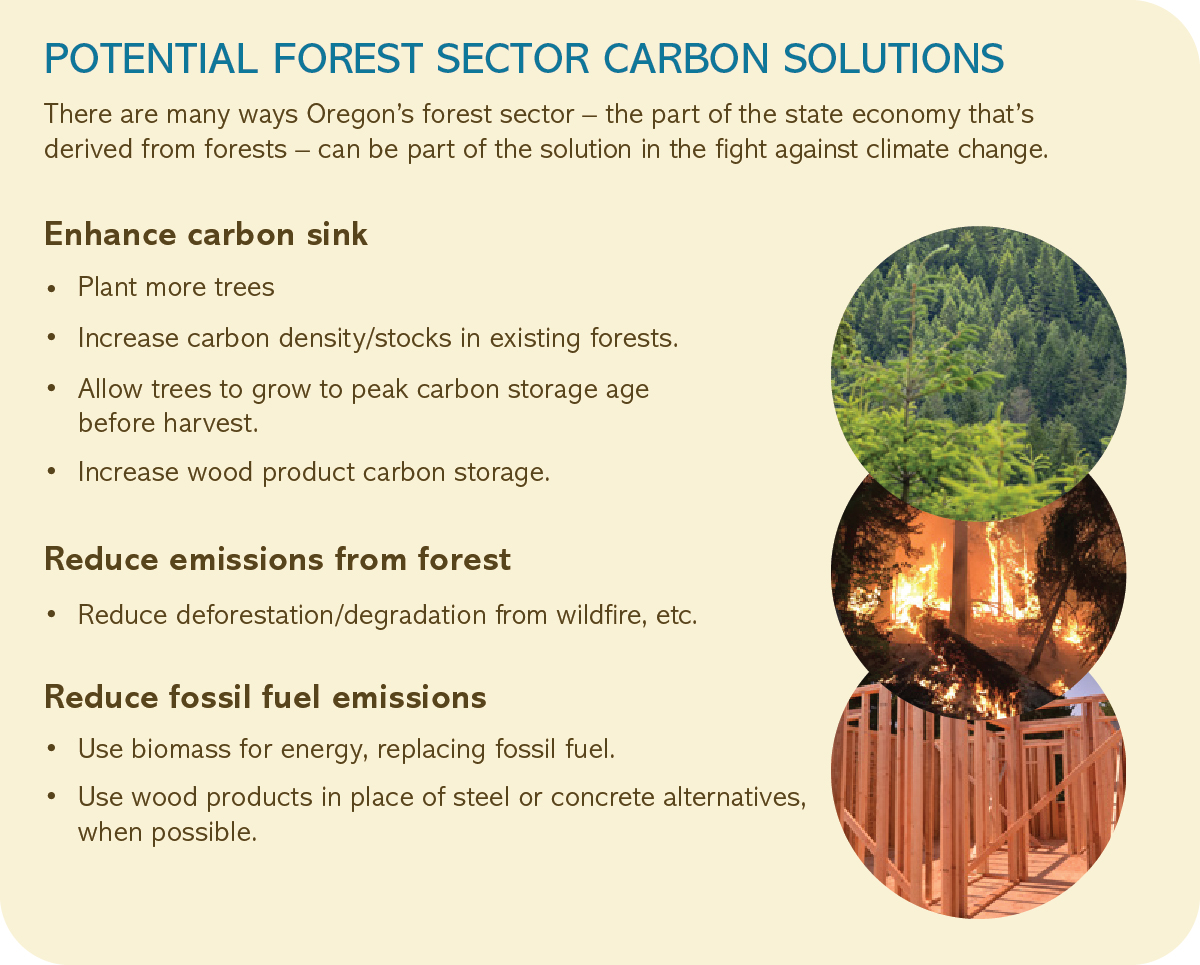 AN ARRAY OF JOBS

Having a “forest job” doesn’t just mean working as a logger or a park ranger. Tens of thousands of Oregonians are employed in a variety of forest related jobs, from forestry, logging, millwork and cabinetmaking to engineering, hydrology, business management and academic research. These forest professionals help care for our forests, conserve fish and wildlife habitat, protect water, sustain forests for future generations and make innovative forest products.

The forest sector encompasses a diverse array of career paths that includes firefighters, ecologists, foresters, wildlife and fish biologists, and more. Forest sector jobs are present in each of Oregon’s 36 counties. In some rural counties, the sector is responsible for nearly a third of the economic base.

Although there are many well-paying career opportunities in the sector that can be pursued straight out of high school, technology advances in wood products manufacturing, forest management and digital forest mapping often require specialized training and education that typically earns workers higher wages.

Forest-related employment in Oregon totaled 61,556 jobs in Oregon in 2019, according to the Oregon Employment Department. This is about 3% of the total jobs in Oregon. However, in four rural Oregon counties, Grant, Douglas, Crook and Lake, forest sector jobs account for more than 10% of total jobs.

The average annual wage of those jobs was $56,500, roughly 3 percent more than the average wage of $55,000 for all Oregon employment. In some Oregon counties, especially rural ones, forest sector jobs have significantly higher than average wages. Forest sector wages in Clatsop County, for instance, are 85 percent higher than the county average. 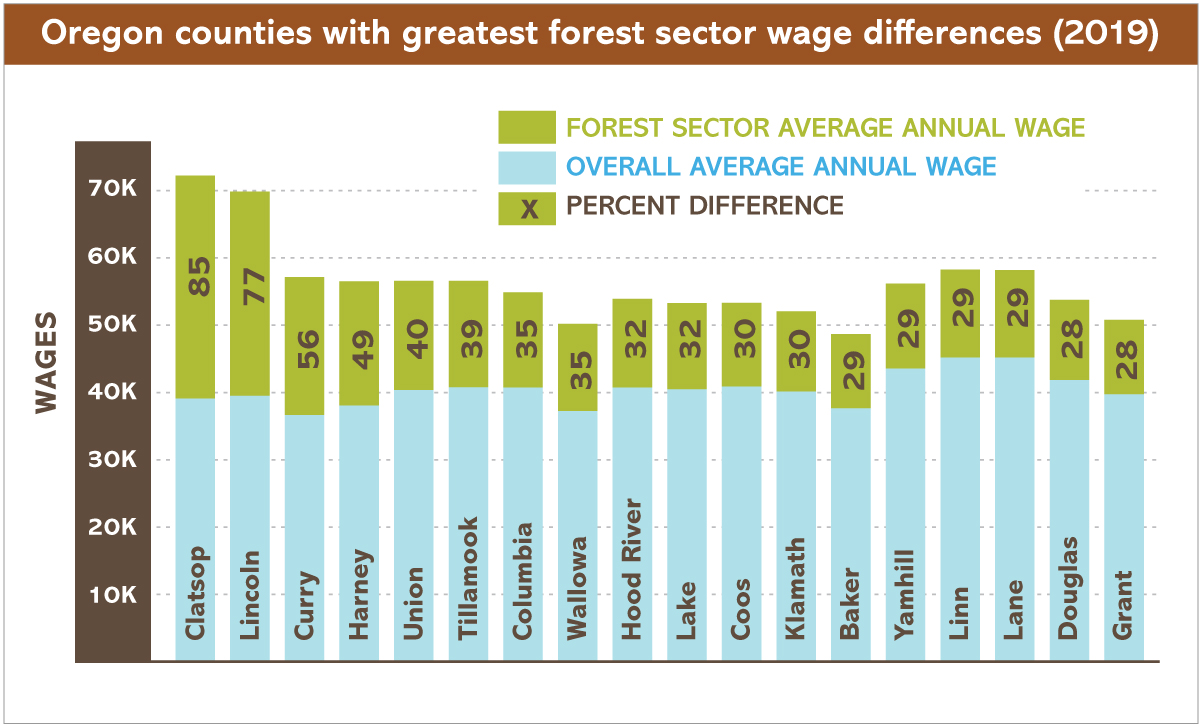